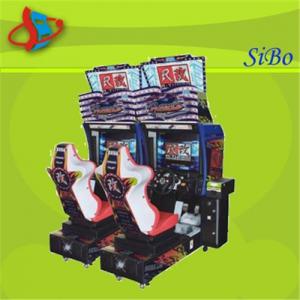 Sample Price : Depending on the present product price

Delivery Time : within 5 working days(depends on your quantity)

1 R-Tuned is a new racing game from Sega's AM2. R-Tuned is the latest street

racing title to be released for coin-op, and is a completely new IP from AM2.

2 The action takes place on real locations including the streets of Hong Kong and New York, and for each district there will be multiple courses available. Play modes already revealed include Battle, Time Attack and Competition. In Battle mode, players receive money at the end of the race based on how well they did, which can then be used to buy new cars.

3 R-Tuned also has a Drift feature, and an unlimited super boost which when used causes the wheel to shake tremendously. R-Tuned runs on the Lindbergh system, also can be used with an IC Card feature, so that you can save your game data.

Super Drift: just turns the steering wheel at the right point and thats it!

Anyone can perform an awesome drift. Extremely simple!

Super Boost: the boost button is attached to the steering wheel. Just hold it to accelerates at incredible speed. There is no frequency restriction, you can use it all the time.

5 However, when you are in boost, the tremendous vibration is transmitted to the steering wheel; it is necessary to hold it down to securely. You receive prizes at the end of a race. The prize changes as you take good/bad positions. With that prize, it is possible to purchase new cars.

Thank you! Your message has been sent to the following suppliers.